Skip to content
In the Presence of the Present: Thoughts on A Thousand Thoughts

Author Rebecca Solnit discusses a special program being held in Zellerbach Hall on Thursday, February 13, celebrating both the Kronos Quartet’s more than 45 years at the vanguard of contemporary music and composer Terry Riley’s 85th birthday.

Thoughts on A Thousand Thoughts
by Rebecca Solnit

On Thursday, February 13, a special program in Zellerbach Hall celebrates both the Kronos Quartet’s more than 45 years at the vanguard of contemporary music and composer Terry Riley’s 85th birthday. 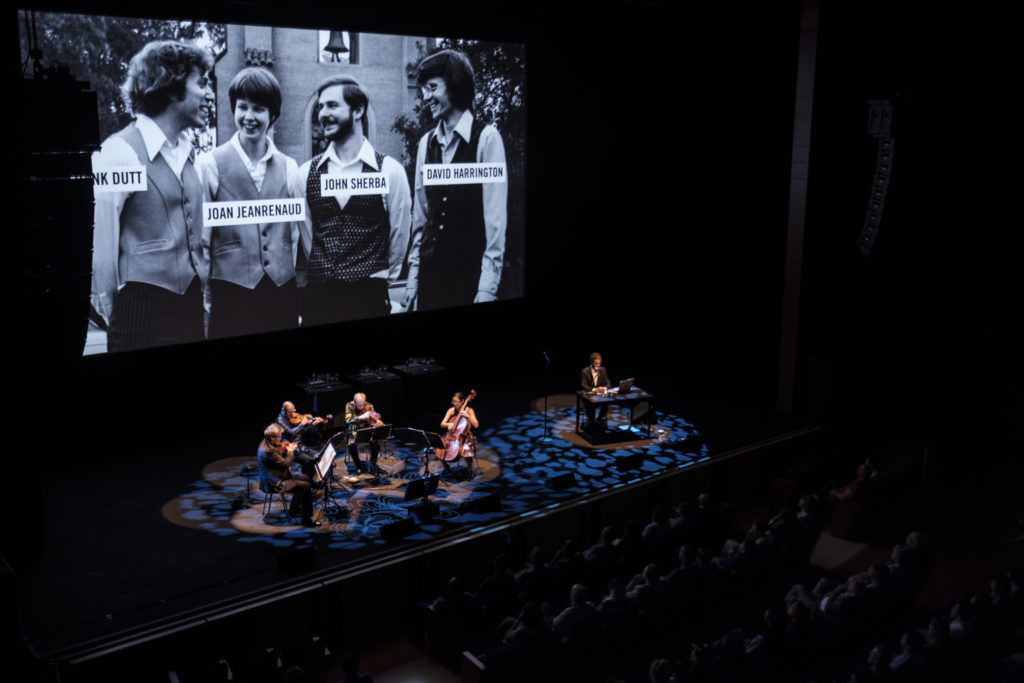 A bow made of wood and horsehair coated with resin from trees scrapes across a string, which makes vibrations in the hollow of the wooden instrument which travel as a series of sound waves in the subtle matter of the air and, perhaps, penetrate the labyrinth of a human ear, or a hundred or a thousand, and this vibration is interpreted by the brain or the brains as information that might have, to use a word that means such vibrations, resonance as a source of pleasure or pain or sorrow. This is one way to describe a note of music on a violin. It is as ephemeral as the waves of the sea or ripples in water; it arises, it fades, it exists in time, and that ephemerality always speaks of mortality and the desire to transcend it, of motion that exists in time, of life that is itself a kind of motion, since we call the living animate and the un-living inanimate.

Human beings have acknowledged and transcended mortality with culture, with rites and songs and other elaborations that can be passed on and bridge more than one human life, that can spread like ripples on a pond, like a sound, that can be reiterated. A Thousand Thoughts (Thurs, Feb 13, Zellerbach Hall) begins with the story of The Lost Chord, a song that was one of the first pieces of music recorded when technology made possible the conversion of live sound into tiny impressions on a wax cylinder (and later on phonograph records [phono for “sound,” graph for “writing”; these were literally devices for writing down sound]), and then on magnetic tape, and then as digital data that shaved off some of the fuzz of the vibrations to make something perhaps a little pared down and cleaner than what sounded in the studio where the recording was made).

A Thousand Thoughts begins with the irony of The Lost Chord, because it was about music heard once and never recovered that offered some joy, some solace, some peace that then vanished, about the sense of loss that was tied to death and perhaps to the impossibility of hanging onto transcendent moments. Perhaps it begins with that story because in it is the desire of all art to transcend time, to shore something up against its depredations, and the particular contradictions of art that unfold in time, like music—that pleasure in the ephemeral, in sounds that can only exist in time itself. A note is heard, it fades, it is gone. There is no music outside of time, and time itself is full of the impossibility of keeping and the inevitability of change, that force that sometimes feels like liberation and sometimes like tragedy. 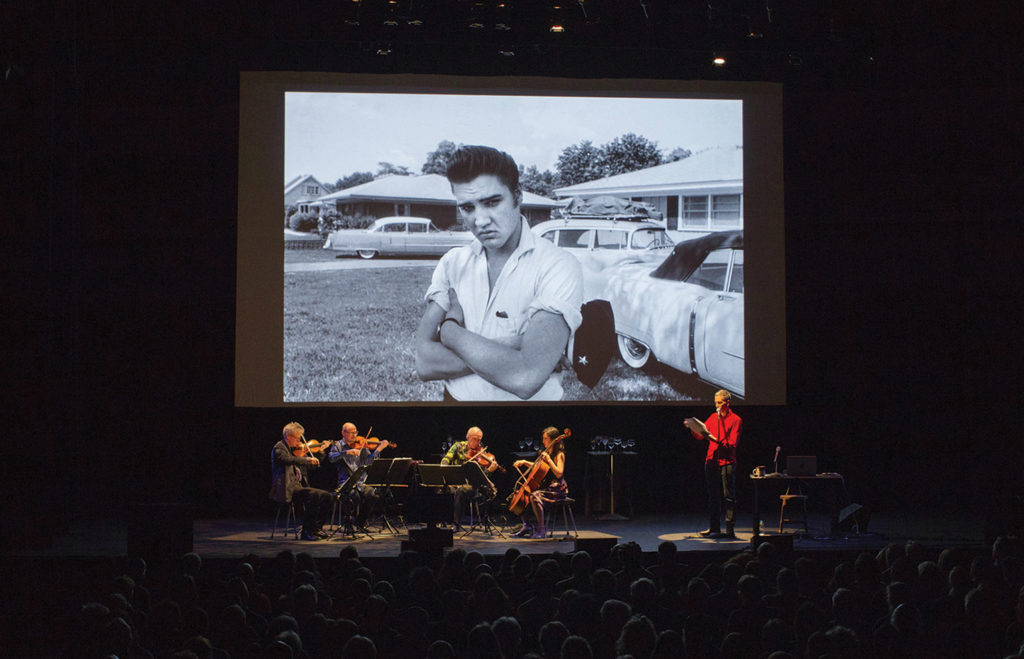 Kronos founder David Harrington described a quest analogous to The Lost Chord, saying “We have not created the bulletproof piece of music that will prevent harm from happening— you know, [that] a young child can wrap around herself or a grandparent can wrap around his family. We haven’t been able to do that yet, but I think it’s possible, and I spend every minute of my waking life trying to find that.”

A Thousand Thoughts, a thousand questions, mine, yours, ours, theirs, questions that perhaps open up things that definitive answers would only nail shut. Kronos Quartet’s long trajectory offers a series of questions that are solid and answers that are elusive: How do you find a path between predictability and instability? How do you have both a clear identity and an open door that lets in new ideas and collaborators? How do you keep the faith that what you’re doing matters? How do make an art that grows like a tree, ring by ring, year by year, and stands as a testament? How do you keep it alive through all the changes, and how do you incorporate the change that is, as my photographic collaborator Mark Klett likes to say, the measure of time? Or how do you proceed as Shunryu Suzuki-Roshi said in some instructions for Zen Buddhist practice, “not too tight, not too loose,” not so tied by custom and convention and the past, not so formless that you lurch and spill into whatever the present offers?

There was an old idea of immortality as transcendence, as beauty, as power that was less about living forever than about lifting someone out of themselves and the gloom and despond of mortality. There is also a particular beauty of mortality, of this light that will never shine the same way twice, of the spring that will be devoured by the summer, the youth that will be consumed by maturity, the freshness of beginnings and the ripeness of arrival.

The live music of the “live film” A Thousand Thoughts raises other questions, about irreproducible and evanescent experience, about the water that runs through your fingers, about the events that cannot be reconstituted. How do you swim upstream against what film and all our digital era has become, an immersion in other times and places than the present: in recordings, images, and reproductions? Once, everything happened and was then irretrievable, though you could sketch it or describe it in words on paper or spoken aloud, and then in the late 1830s came photography, promising exact replication of the visible, and half a century later came recorded sound, promising exact replication of the audible. They had photographs, then phonographs; they thought that they had conquered time; we had even more recording technology, even more data stored, even more ease in capturing every moment.

Did we conquer time or were we conquered by substitutes for presence? Did we give up the moment itself, the things themselves, for their reproductions? Did we fall into substitutes and fakes and lose our grasp on the moment, give up presence for absences and in the process lose ourselves that are also mortal, time-bound, eternally changing, eternally invited to witness in the moment? Is there a way that thinking you will never die becomes a way to never live, like the person who tries to document the moment so that in the future the past will be retrievable and only misses the present? The present, that pun in English for gifts and for now.

The foundation for modern cinema was laid when Eadweard Muybridge animated sequential photographs and when Edison captured recorded sound on his wax cylinders. The latter man saw it as an uncanny act, a reaching into the grave, a dance with the dead.

“In the year 1887,” Edison later remembered, “it occurred to me that it was possible to devise an instrument which would do for the eye what the phonograph does for the ear and that, by a combination of the two, all motion and sound could be recorded and reproduced simultaneously. I believe that in coming years by my own work and that of Dickson, Muybridge, Marey and others who will doubtless enter the field, that grand opera can be given at the Metropolitan Opera House at New York… with artists and musicians long since dead.” 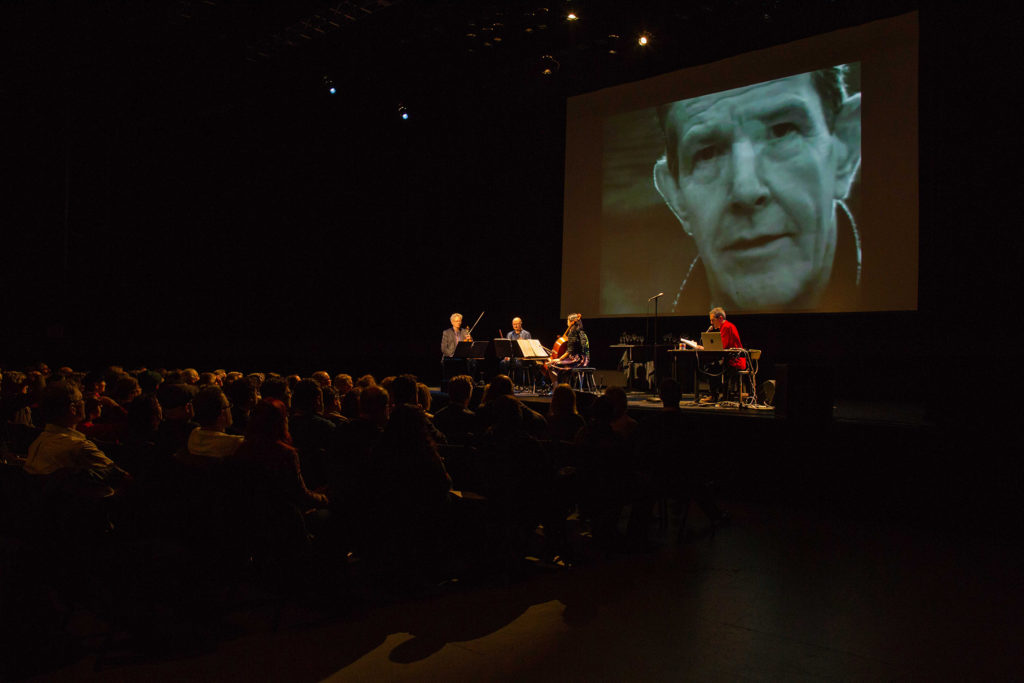 He declares that cinema is a ghost dance, as I said somewhere else, that it is a raising of the dead or at least a fraternizing with the dead and the gone. It is not about presence but absence and the ability to be with who and what is absent. Harrington wanted to make a music that would protect a child from harm, but Edison aspired to revive the dead at least enough to make them sing for us. Perhaps in that is the difference between the present and the past recaptured.

Edison’s astonishing declaration raises as well questions Sam Green has tried to answer: What is live cinema? What is it to be fully present? What is it to have the thing itself and not its representation? What is it to be here and now in an age of being anywhere but here, and every time but this irreproducible moment? What is it to have a film mixed live before you, prone to accidents and serendipities, to be each time something distinct, of its time, and not outside it, to hear music as a vibration of horsehair and wood and the movement of muscles traveling through the air and then into the labyrinth of your ear, with all the nuances that get sanded down and painted over by a digital recording? What is the work of art in the age of digital reproduction, and what is it to be in the presence and the present?

A product of the California public education system from kindergarten to graduate school, Rebecca Solnit is a frequent contributor to the Guardian and Lithub.com, and the author of 25 books about hope, history, feminism, landscape, and cultural transformation.

Beethoven 250: In Search of Something Unreachable

In the Presence of the Present: Thoughts on A Thousand Thoughts